Living and enjoying life in Biel/Bienne, the largest bilingual city in Switzerland.

Biel/Bienne, a city with many faces

The people of Biel/Bienne live right at the heart of where culture, education and outdoor activities all come together. Biel/Bienne is the largest bilingual city in Switzerland: An enticing mixture of charming French and lively Swiss-German can be heard floating through the air around town. Providing attractive and affordable housing, Biel/Bienne is a very appealing place to call home, giving you the perfect chance to enjoy a true work-life balance.

The neighbourhoods of Biel/Bienne: charming, modern and well-situated

With the growth of the watchmaking industry, the city of Biel/Bienne began to boom in the mid-19th century. Unlike many other cities, its centre is not situated in the Old Town. Instead, it can be found in what is known as the «New Town», along the axis formed by Bahnhofstrasse, Zentralplatz (the main square), Zentralstrasse and Nidaugasse. The Old Town has therefore retained all its charm and has a lot to offer, including affordable apartments, restaurants with beautiful terraces and small shops. 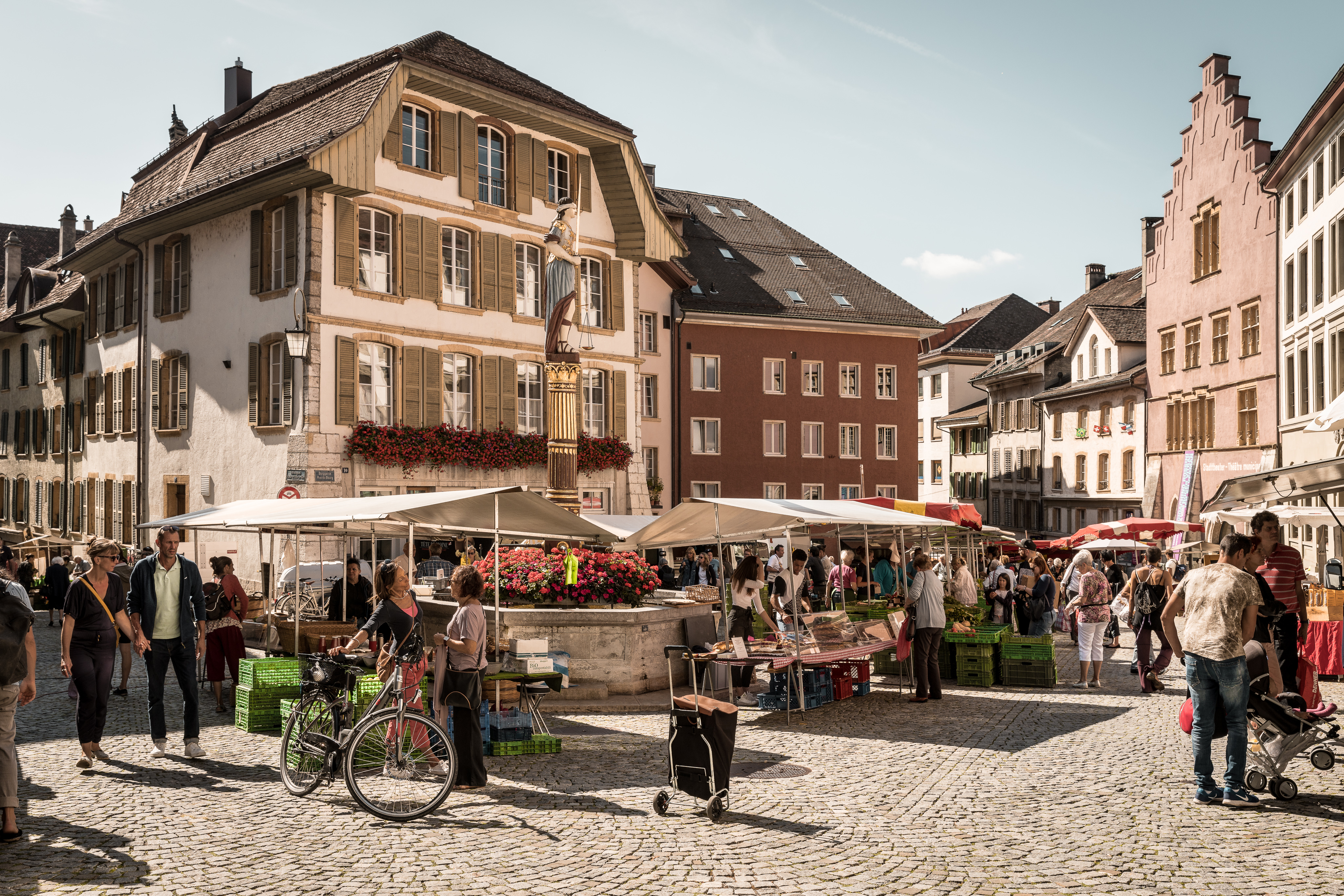 Views of the Alps

The city of Biel/Bienne has many neighbourhoods, each with its own undeniable charm and advantages: the Beaumont district extends from east to west along the slopes of the first chain of the Jura mountains, overlooking both the Swiss Plateau and the Alps. Vingelz, a former fishing village on the shores of the lake, offers a chance to live by the water, but is also surrounded by ancient vineyards. On the way back to the city centre, you pass through the Museum District. Just a stone’s throw from the railway station, it is also close to the green areas of Schüsspromenade and Elfenaupark. 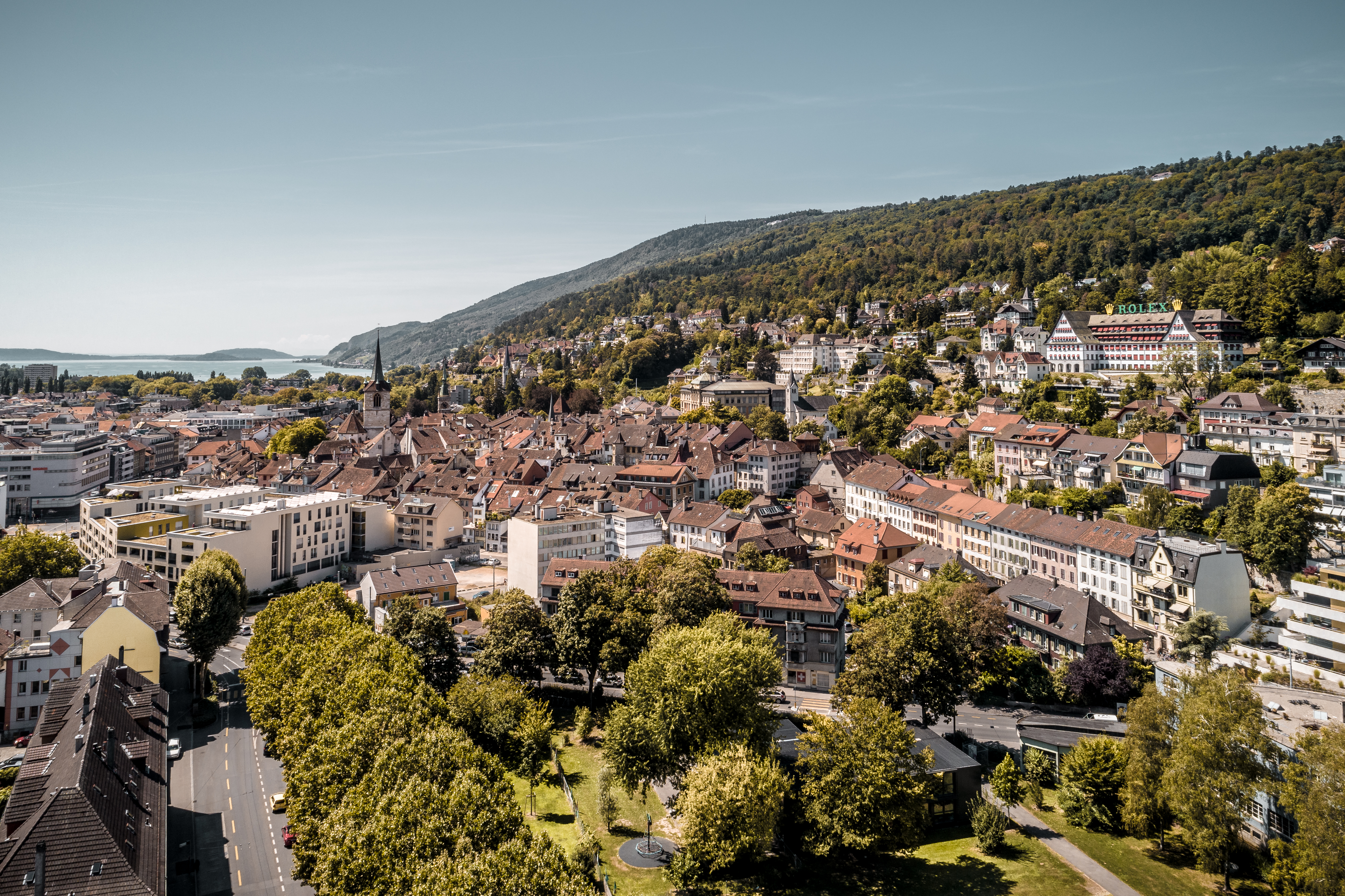 Between watchmaking and nature

There are various residential districts east of the city centre, some of which are in transition, like the area between Gurzelen and Schüssinsel: following the construction of prestigious new buildings by Omega and Swatch and the development of the Schüssinsel public park, new cooperative housing projects are being created in addition to those that already exist in Champagne. Further east, the Bözingen district forms the link between the city, its natural surroundings (Taubenloch Gorge and wildlife park) and the Bözingenfeld ‘industrial zone’, where many sports buildings such as the Tissot Arena and Swiss Tennis are located. 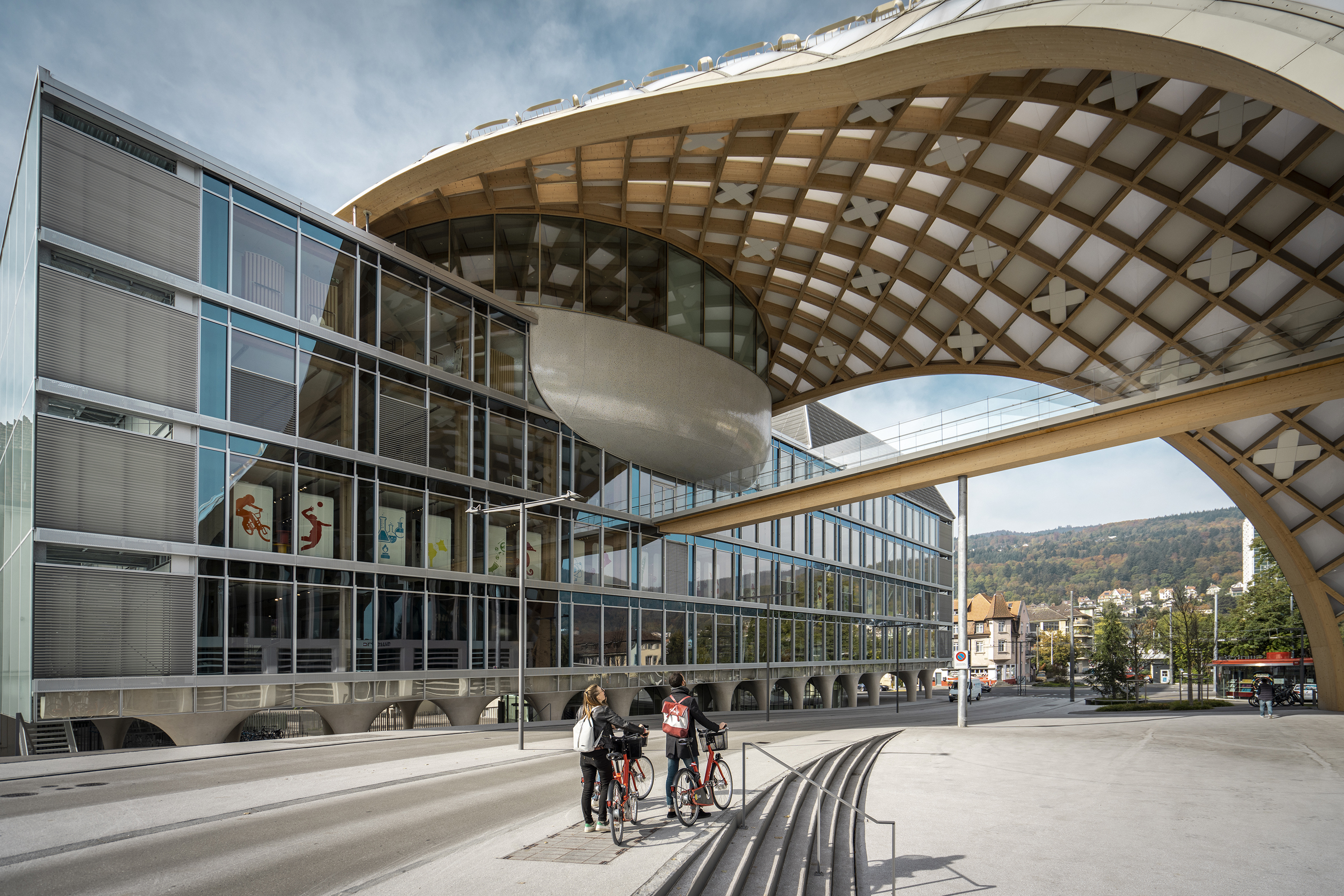 The Mett neighbourhood to the south-east of the railway tracks has its own SBB station, from which you can reach the city centre in two minutes, and many of its residential areas, such as Geyisried or Mettmoos, are close to nature. Towards the west, the Linde, Möösli and Mühlefeld districts offer a variety of housing options from single-family homes to small cooperative buildings. The centre of Madretsch, 500 metres from the Zentralplatz main square, has been free of through traffic since the opening of the A5 bypass and is also scheduled for regeneration in the next few years. 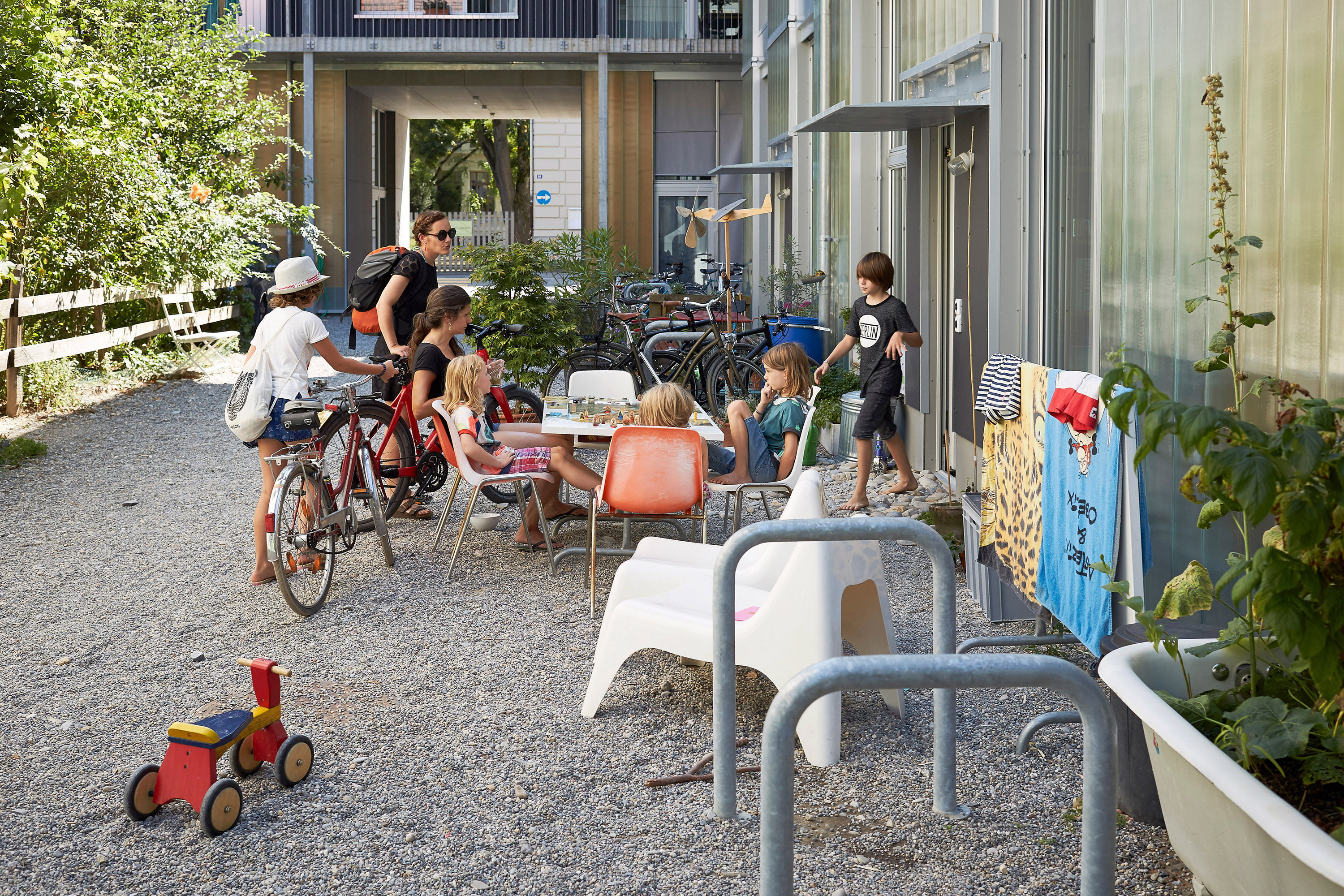 All of these neighbourhoods are easily accessible, with the local transport company running a regular bus service. And every part of the city along with the recreational areas, public parks, lake and forests can be reached by bike in no more than 15 minutes. 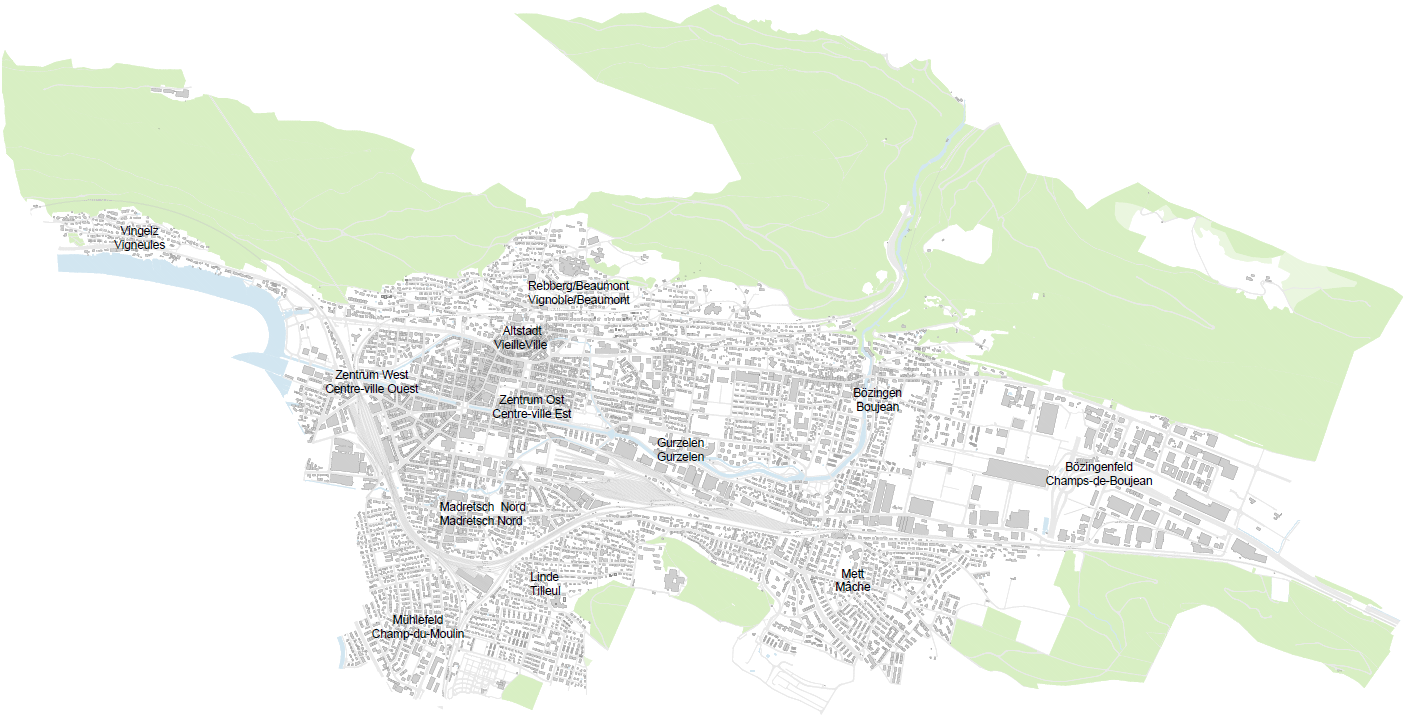 Your Biel-Buddies
Best of Biel
Working, living and chill out
Social Media
City of Biel/Bienne